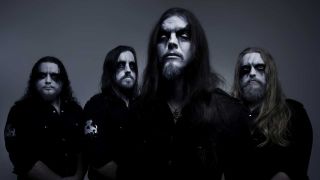 Necronautical have quickly gained a reputation as one of the UK’s most promising new black metal acts in the five short years since their creation. Founding members Naut, Carcarrion and Anchorite recorded, produced and released their debut album, 2014’s Black Sea Misanthropy and grabbed the attention of Cacophonous Records. The record company signed the band for their second album, The Endurance at Night, released in 2016, which garnered them critical acclaim and saw them featured in Metal Hammer, amongst other worldwide publications.

From an initially recording-only project, the band have come on leaps and bounds, and their debut live show saw them opening for none other than Dark Funeral. Their immersive stage performances gained them a loyal following, and sets at Inferno Festival, Mammothfest, Incineration Festival and the Blackwood Gathering.

Ahead of the release of their latest record, Apotheosis, we caught up with the band to find out which contemporary black metal acts they believe are successfully spreading visceral, hateful sorrow across the British Isles.

“It’s testament to the strength and diversity of today’s UK Black Metal scene that this Top 10 was so difficult for us to devise. We’ve tried to select bands that we felt best exemplified the broad range of Blackened sounds emanating from our homeland.

“This is just the tip of the iceberg however, and we’d certainly recommend delving further into the UK’s ever growing underground, as you’d be sure to find something special.”

“Winterfylleth are the quintessential British Black Metal band. Their atmospheric and melodic soundscapes are performed with heartfelt conviction, are evocative of the natural beauty of England. Taking influence from artists such as Drudkh, Ulver and Burzum, Winterfylleth play pagan Black Metal of the highest quality.

“They have led the way where many British bands have followed, and have been highly supportive of Necronautical from our humble beginnings, and even invited us to accompany them on their 10 year anniversary tour, and for that we are sincerely thankful.”

“Whilst now sadly disbanded, Wodensthrone’s second album Curse was newly released around the same time that we were formulating our first ideas for Necronautical. This band an epic “wall of sound” approach to their music, perfectly set off by moments of serenity.

“Their use of keyboards, multiple vocalists and occasional progressive tendencies served to amplify the overarching atmosphere of the music, rather than detract from it, and that was definitely inspiring to us when we were first contemplating our own musical direction.”

“The Infernal Sea have something that’s all their own. Their obvious technical proficiency is streamlined into a razor sharp aural assault, and their presence as a live entity is equally foreboding and sinister.

“They are one of Britain’s most hard-working and consistent black metal bands, but more than that, these guys simply write great songs that always evoke a strong reaction, whether performed live or on record. They are good friends of ours and outstanding musicians, with special mention to Dean for possessing a truly impressive vocal talent.”

“Visceral and uncompromising, London’s Nahemia play true-to-the-core Satanic Black Metal. Whilst comparable to genre greats such as Tsjuder, Marduk or Gorgoroth, these guys have developed an approach to Black Metal songwriting that is distinctly theirs.

“These guys put absolutely everything into their band, music and performances, and have a strong dedication to their craft which is inspiring to us. As friends of the band, we have been lucky enough to have heard there soon to be released debut album in its entirety, and it’s a brutal slab of blasphemy that is sure to make an impact, as you can hear in the single World Annihilation.”

“An absolute mainstay in Manchester’s extreme music scene, as well as nationally, Burial are a power trio like no other. Firmly adopting a no frills approach to their music and performances, these guys perfectly blend the sounds and attitudes of bands like Darkthrone, Deicide and Motorhead into something snarling, bleak and powerful.

“As well as that, they’re absolutely brilliant live. We’ve been lucky enough to hear some new material from their next album, and it promises to be some of their best work to date, absolutely to the point and without compromise.”

“Probably one of Britain’s most musically adept Black Metal bands, Fen play progressive atmospheric black metal to the highest standard. Their use of unusual time signatures and inventive chord sequences coagulate into an immersive and atmospheric sound that can take you to another place.

“We’re always impressed by artists that are able to make musically complex statements without detracting from the overall passion and feeling behind the music, and Fen do that like no other.”

“Brighton’s Vehement are good friends and many time touring partners of ours. Musically they have this distinct amalgam of driving percussion, creative guitar playing and multi-faceted vocal delivery that ends up sounding somewhere between the unlikely bedfellows of Urfaust, Rotting Christ and Dimmu Borgir.

“As well as having a really creative approach to songwriting, these guys also have three great vocalists in their ranks, used to great effect. Check out Tidal Verse from their recent album Ashes.”

“Nottingham’s Wolvencrown are a relatively new band who are making a big impression round the UKs live circuit. The band has strong atmospheric inclinations, but the music is raw and driving at the same time, taking influence from bands like Wodensthrone and Windir but adding a hefty dose of misanthropic bite.

“We know Wolvencrown to be great guys who do a lot of work for the black metal scene in the UK generally, and we cannot wait to hear their first full length album, which we believe will be released this year. But for now, check out “Forest of Bleak” from their self titled debut EP.”

“Undoubtly one of Britains most sonically extreme bands, Liverpool’s Ethereal have been battering audiences nationally and internationally for almost two decades.

“Beneath the abundant symphonic embellishment, Ethereals music is unabashedly brutal and twisted, using their impressive techinical proficiency to assault the senses, but delve deeper and you’ll find a broad range of dynamics and influences brought together into something totally unique.

“Ethereal are an absolute tour de force as a live band, and we’re eagerly anticipating the follow up to 2015’s Opus Aethereum.”

“Whilst originally starting life in Iran, it’s since their rebirth on UK soil that Trivax have been afforded the freedom to make an impression. There musical output is impressively broad and flawlessly executed, with a palpable dark force driving at its heart.

“Trivax have an irrefutable stage presence that demands attention, born of a genuine passion and drive for doing what they do. Their debut album Sin is a monumental piece of work, worthy of far greater attention than it has already received, though we know from our own relationship with this band that the best is still come, definitely one to watch!”