Heavy metal music is perceived by many members of the goth subculture as the “crass, crude macho antithesis of everything that their music represents”.[49] In contrast to the “softer” and “more feminine” character of gothic music, the heavy metal genre is typically associated with aggression, sexism and masculinity.[50] Despite this difference, “a few bold souls have identified Black Sabbath’s eponymous 1970 debut album as the first ever ‘Goth-rock’ record”.[49] The author Gavin Baddeley notes that the title track of the album “describes a satanic rite, complete with driving-rain and tolling bell sound effects, while the cover focuses on a black-cloaked, spectral-looking girl in a graveyard, shot through a sickly pale ochre filter”.[49] Other commentators have described Black Sabbath as the “absolute prototype gothic heavies”[51] and observed that by separating the band’s music “from their heavy metallic connotations”, one “could cull a killer Goth album from their first five LP’s, with every future reference point and requirement intact”.[52] 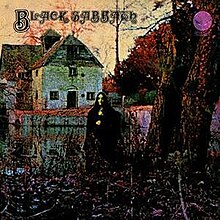 The first Black Sabbath album with its gothic cover art

The “vaguely medieval, minor-key sounds” of Rainbow, Dio and Judas Priest has also been described as “gothic” prior to “the emergence of goth rock as a post-punk genre”.[13] The bands Blue Öyster Cult and Iron Maiden have featured some gothic lyrics in their music on songs such as “(Don’t Fear) The Reaper” and “Phantom of the Opera“.[53] Deep Purple‘s song “Stormbringer” has been called a “goth metal treasure”.[54] The Danish metal band Mercyful Fate had also demonstrated “a Gothic obsession with evil and the occult”.[55] Frontman King Diamond continued exploring his interest in gothic storytelling after establishing a solo career under his own moniker,[56] issuing “a series of concept albums which told Gothic horror tales with sound effects and song”.[57] During the 1980s, the former Misfits frontman Glenn Danzig also “occupied the no man’s land between Goth and heavy metal”.[57] With the dissolution of his second band Samhain in 1988 and the creation of his own eponymous act, Danzig went on to combine heavy metal riffs with “a heavily romanticized, brooding, gothic sensibility”.[58]

The Swiss group Celtic Frost was another precursor to gothic metal, translating the influence they drew from gothic rock acts Bauhaus and Siouxsie and the Banshees into their own albums.[59] The band’s “radical fusion of violent black metal and elements of classical music” was dubbed “avant-garde” and had a huge impact “on the evolution of European heavy metal”.[60] Christofer Johnsson of the Therion cites Celtic Frost’s 1987 album Into the Pandemonium in particular for playing a key role in the development of the “gothic and symphonic wave of bands” in the 1990s, noting further that neither his group Therion nor Paradise Lost “would have sounded the way we did without Celtic Frost”.[61]

Gothic rock had emerged as an offshoot of post-punk in the 1980s but by the end of that decade, the genre had splintered into different directions with bands such as The Cure, Mission U.K. and Siouxsie and the Banshees incorporating “more pop and alternative elements” while The Sisters of Mercy, Fields of the Nephilim and Christian Death took on a “heavier, sometimes metal-influenced approach”.[62] The Sisters of Mercy was one of the leading goth bands of the 1980s, playing “a slow, gloomy, ponderous hybrid of metal and psychedelia, often incorporating dance beats”.[63] The band only released three full length albums with the debut First and Last and Always released in 1985. Their last album Vision Thing arrived in 1990 as one of the earliest attempts to mix gothic music with heavy metal.[64] Fields of the Nephilim had also released only three studio albums before their initial dissolution in 1991.[65]They have since reformed, released more albums and been recognized for their influence on the “glut of metal bands” in the early 21st century “that incorporated obvious elements of goth into their sound – especially detected in their appreciation of symphonic and keyboard sounds (as well as their fashion sense)”.[66]

According to Allmusic, “goth metal first emerged during the early to mid-’80s, centered around Los Angeles‘ so-called ‘death-rock‘ scene headed by Christian Death”.[13] Acclaimed as the “founding fathers of American goth rock”, Christian Death went through a major personnel change in 1985 with the departure of the band’s leader and founder Rozz Williams.[67]Guitarist Valor Kand took over the reins and under his leadership, Christian Death subsequently pursued a more metal-oriented direction.[67][68] In particular, their 1988 album Sex and Drugs and Jesus Christ has been described by critic Steve Huey as “heavy goth-rock bordering on metal”.[69]

Nick Holmes is the vocalist of the pioneering Paradise Lost. The group is known to have influenced many subsequent bands in the genre.[70]

As a musical style, gothic metal “truly began in the early 1990s in the north of England” with the three bands Paradise Lost, My Dying Bride and Anathema representing “the core of the movement”.[71] They are all also three of the bands that pioneered the death/doom sub-genre, showing why gothic metal originated from death/doom. All three bands were signed to Peaceville Records during the early 1990s and have since been known as the “Peaceville Three”.[72] They had roots in “frenetically abrasive death metal, but they were also influenced by what Paradise Lost vocalist, Nick Holmes, described as the ‘really bleak, dark sound’ of Dead Can Dance“.[73]

Paradise Lost was the first to form in 1988 in Halifax, England.[74] Their debut album Lost Paradise was released in 1990 and “helped define the rules of doom/death metal: grinding, de-tuned anthems of woe topped with death metal-style guttural vocals” while demonstrating that the band was “already reaching for realms unknown to their then-amateurish abilities and latent promise”.[75] The band was “evolving at a fast clip” and in the following year, their second “aptly titled album” Gothic came as “something of a departure for the band’s earliest fans”.[76] With a “less deliberate, more energetic arrangements”, the album featured a “slightly cleaner approach to guitar crunch” and “cautious use of keyboards and even female vocals, which together added atmospheric nuances to the group’s ultra-depressive power chords”.[76] Gothic was a chart success across Europe, particularly in Germany,[77] and has since been acclaimed as “one of the most influential albums” in heavy metal music for creating the gothic metal genre. Their 1992 album Shades of God continued the transition[78] while the follow-up 1993 album Icon represented “a turning point” for the band with the experimental use of synthesized strings, timpani, piano and angelic female vocals.[79]By the time of 1995’s Draconian Times album, Paradise Lost’s music firmly stood “between stark, oppressive goth rock and crunching heavy metal”.[80] With these five albums, the band had created “a bold collection of songs that sounded like Black-era Metallica played by a group who loved the Sisters Of Mercy”.[81] They have since been recognized as the band that “originally laid the gothic seed that other bands have been nicking and reaping in recent years”.