Blake’s works offer an alternative to the failures of the Enlightenment, which couldn’t muster a consistent argument for abolition. 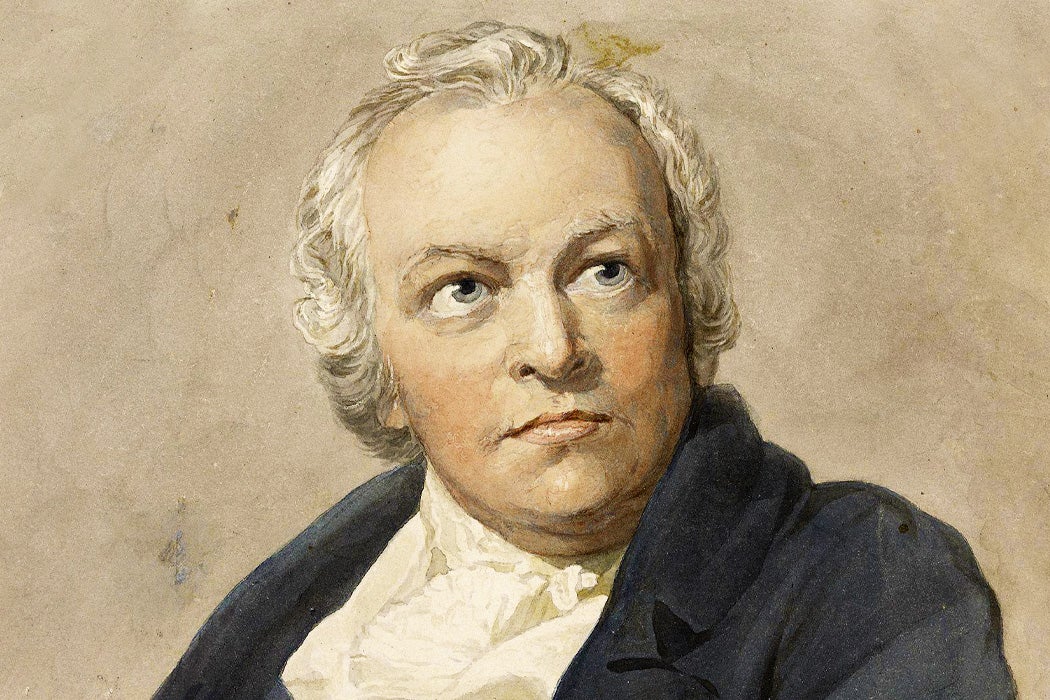 Along the Caribbean coast of Suriname, all of the brutalities of eighteenth century empire existed in cruel abundance. From the genocide of the natives to the millions of enslaved Africans who labored in sugar-fields for first the English and then the Dutch, Suriname provides a sobering understanding of colonialism’s twin legacies of tobacco and terror, sugar and slavery. No contemporary text better illustrates slavery’s cruelty than the Scottish-Dutch soldier John Gabriel Stedman’s 1796 The Narrative of a Five Years Expedition against the Revolted Negroes of Suriname.

Selling Stedman’s book alongside pamphlets by Thomas Paine, Benjamin Franklin, and Mary Wollstonecraft, its printer Joseph Johnson knew that the narrative’s power lay in images as well as words. One illustration depicts a young man naked but for a loin-cloth, still alive with unblinking eyes, hung from a hook which is roped around a bloody exposed rib. A scattering of bones and skulls litters the base of the gallows, as if at Golgotha, where Jesus was crucified. Johnson understood that conflating this lynching with the crucifixion was necessary, and enlisted the aid of an illustrator and poet named William Blake.

An advocate of both the American and French revolutions, Blake was the prophet of rebellion who could sing:

In every cry of ever Man,
In ever infant’s cry of fear,
In ever voice, in every ban,
The mind-forg’d manacles I hear.

His abolitionism was a given, but his understanding of emancipation extended in even more radical directions than other Enlightenment thinkers whose rationality Blake found oppressive, intoning that “Prisons are built with stones of law.” Where the Enlightenment promoted rationality, Blake embraced mysticism; if the philosophes celebrated science, then Blake advocated visionary ecstasy.

Such was a view that Blake presented of himself, naming names when he wrote
Mock on, mock on, Voltaire, Rousseau…You throw the sand against the wind,
And the wind blows it back again.
Modernity, Blake believed, was defined by a wicked trinity of Francis Bacon, Isaac Newton, and John Locke – incidentally the same trio that Thomas Jefferson valorized as intellectual heroes. Such a confrontational position would seem to configure Blake as a revanchist. Nancy Morrow writes in Early American Literature that the Enlightenment is often seen as a “philosophical movement that unequivocally advocated universal human liberty and political self-determination,” and yet the Enlightenment mainstream often advocated for inhumanity, such as when Locke wrote in the 1669 Fundamental Constitutions of Carolina that “Every freeman of Carolina shall have absolute power and authority over his negro slaves.”

Blake was influenced by non-conformist religious sects, which compelled him to reject slavery as an abject horror.

By contrast, Blake was influenced by non-conformist religious sects from the well-known Quakers and the Baptists, to the exotic Muggletonians and Swedenborgians, which compelled him to reject slavery as an abject horror. Morrow emphasizes that “major sources of arguments against slavery during the Enlightenment” such as the Quakers “cannot be considered a true expression of the spirit of Enlightenment philosophy.” As the Age of Reason once again becomes a cultural flashpoint, it behooves us to examine what the Enlightenment was, and how its discontents offer an alternate vision.

Morrow writes that the literature of the eighteenth century demonstrates that the “dictates of reason, logic, balance, order and compromise were ineffectual tools for writers who may have wanted to forge an abolitionist ideology.” This was certainly the case for Stedman, who advocated for gradual reform rather than abolition, barely grappling with his own role in the institution of slavery. Despite this, Mario Klarer writes in New Literary History that Stedman’s narrative “ranks among the most important and influential humanitarian texts of the late eighteenth… century,” becoming a touchstone for the abolitionists, and a crucial source for Blake.

The historians Gert Oostindie and Inge Klinkers explain in Decolonizing the Caribbean: Dutch Policies in a Comparative Perspective that by the late eighteenth century in Suriname “the native people had almost completely died out” and that “slaves constituted more than ninety percent of the population.” These are staggering numbers that dwarf similar populations in the United States. Stedman had joined a Dutch army deployed to combat rebelling enslaved Africans, but his book made clear the nature of his service.

Stedman recounts stories such as that of a woman drowning her child to prevent his enslavement, for which she was punished with 200 lashes, or the suicide of a young man who preferred death to flogging. Gruesome scenes which Blake depicts, such as an executioner mutilating an enslaved man: “having not with a hatchet chopped off his left hand, next took up a heavy crow or bar, with which blow after blow he broke to shivers every bone in his body, till the splinters, blood and marrow flew about the field. But the prisoner never uttered a groan.”

If Stedman had ambiguous positions on such evil, the illustrator of his book did not, attacking slavery as both economic and spiritual exploitation. Blake was able to connect his beliefs to the tangible nightmares of bondage. Suriname functioned as a body of evidence for the poet’s positions. As David Erdman argued in the Journal of the Warburg and Courtauld Institutes, both Blake’s verse and artwork illustrated “modes of cruelty and prejudice which he wished to make known to the hearts of his contemporaries.”

Between 1792 and 1794 Blake produced sixteen images for Johnson, all done with “more than his usual care,” as Erdman reports, recycling several as illustrations for his Visions of the Daughters of Albion, with Erdman describing that poem as a counterpart to the “parliamentary and editorial debates of 1789-93 on the bill to abolish the British slave trade.”

Not Blake’s first foray into the controversy around emancipation, as his 1787 lyric “The Little Black Boy” coincided with the “early phase of… [an abolition] campaign in which several artists and writers were enlisted,” as Erdman writes. While Erdman argues that Visions of the Daughters of Albion has slavery as its central theme, the hermetic enthusiasms typical of Blake can make that message difficult to interpret. By contrast, “The Little Black Boy,” from his collection Songs of Innocence and Experience seems deceptively simple. Containing the only unambiguously African characters in Blake’s corpus, the poem presents a black boy narrating his mother’s message about the fundamental equality of all people to his white compatriot.

The narrator prophecies a coming moment, both revolutionary and millennial, when “out from the grove my love & care, / And round my golden tent like lambs rejoice.” For contemporary readers of the poem, however, there is something embarrassing about Blake’s language:

I am black, but O! my soul is white;
White as an angel is the English child:
But I am black as if bereav’d of light

It centers Western chauvinism as much as the equality of humanity. Such language repeats, where “black bodies and this sun-burnt face / Is but a cloud, and like a shady grove” and where, with the coming millennium the black boy shall shade the white boy from the “heat till he can bear… And then I’ll stand and stroke his silver hair, / And be like him and he will then love me.”

As problematic as this is, Erdman argued that Blake was anti-racist, writing that his “engravings, with a force of expression absent from the others, emphasize the dignity” of his African characters. Writing several decades later, David Bindman claimed in Huntington Library Quarterly that Blake, exemplary though he may have been, couldn’t help but be constrained by his era, that he was “unable to free himself—no more than anyone else at the time—from the complex and often contradictory web of ancient and modern beliefs that had settled around Africa.” To focus on the literal language is a red herring. Blake engaged a radical empathy, expressing something about colonialism’s violence that is as psychic as it is physical.

Blake’s narrator is a child, processing trauma while being forced to use the language of his oppressors. The narrator’s promise to the white boy shouldn’t be read as literal, as the possibilities of radical equality are hard to imagine, not least of all because the system under which he lives makes it hard to imagine. It’s a fallacy to assume that what Blake is speaking of is assimilationist, that we’re to believe that the black boy will be transformed into a white boy, just as it would be an error to confuse the archetypal significance of those colors with physical reality. Rather, the kernel of the poem is the narrator’s mother saying: “And we are put on earth a little space, /That we may learn to bear the beams of love.”

Reading “The Black Boy” as simply the racist projection of a guilty white liberal doesn’t do justice to its subtle message.

Reading “The Black Boy” as simply the racist projection of a guilty white liberal doesn’t do justice to its subtle message. This is a lyric about what the constraints of racism does to both oppressed and oppressor, the ways in which ingrained prejudice alters perceptions, and how it limits the anarchic potential of divinity. In both the unearned sense of superiority of the white boy and the undeserved sense of inferiority from the black boy, we approach a subtle understanding of that utopian yearning for when we might “round my golden tent like lambs rejoice.”

Bindman notes that the “white boy adopts a position of supplication that would have evoked unmistakably… the famous emblem entitled ‘Am I not a Man and a Brother?’” Crafted by Josiah Wedgewood in 1786, this famous image depicted an African in chains pleading that question. The enslaved man, meek and deferential, is begging for a freedom that is naturally his right. Bindman claims that “The Black Boy” actually subverts the chauvinism of Wedgewood. When the black boy speaks of his partner by saying “I’ll shade him from the heat till he can bear, / To lean in joy upon our fathers knee,” it’s whiteness that must bow its head in supplication, begging not for freedom, but for forgiveness.

Eaves writes that for Blake the “codes are simply too complex and cryptic—or too ambiguous and contradictory—to be cracked by straightforward references to big public categories.” Blake was not anti-Enlightenment so much as he offered an “alternate Enlightenment,” one that owed more to the religious dissenters than to Locke. While thinkers like Locke dwelled in the fallacies of pseudo-scientific bigotry, Blake was able to construct a vigorous denunciation of both slavery and racism. Marrow writes that the failure “to resolve the problem of slavery is perhaps a failure of this ‘Moderate Enlightenment,’” where an idolatry of what we assume rationality to be lends itself to inhumane conclusions. Blake’s reasoning was different, drawing not from pragmatism, but poetry; not from rationality, but prophecy—and that makes all the difference.

Such an alternate Enlightenment, which sees rights as being an issue of acknowledging the transcendent fixed within our hearts is a message of some use today. Blake offers a radical vision, where we are not slaves, nor consumers, nor products, where we are more than even just citizens—we are human. We are sisters and brothers.