Original article pubished here by The Guardian on October 29th 2015 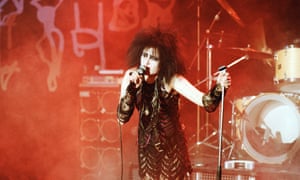 Siouxsie and the Banshees on The Tube Photograph: ITV/Rex Features

“That man cared for you, that man died for you, that man saw the madness in your area.” So ran Sounds’ near-hysterical tribute to the late Ian Curtis, the tragic singer of Joy Division. It was May 1980, and Curtis’ suicide by hanging was a despairing end to Britain’s darkest, bleakest band.

While the 2-Tone dance craze raged briefly and fiercely in the hearts of post-punk Brits, the storm clouds were gathering overhead.

If, as Malcolm McLaren would now have it, punk was bondage trousers, then the glamorous rebellion of antisocial dressing still held a great allure. Mod, skinhead and 2-Tone dressing was not glamorous, nor an expression of individuality.

But the shadow world inhabited by Joy Division, Siouxsie and the Banshees, the Cure et al definitely was. These bands had the right ingredients – sex and death; the fetishistic and the taboo. The ultimate end of Joy Division was real; the others would simply thrive on the mystique.

Bauhaus, UK Decay, Soft Cell, the Cramps and the Birthday Party were all quite different in their musical approach, but each had the necessary qualifications to be bound up in the same black leather bag – and labelled goth.

Ah yes, goth – that convenient umbrella that covers a multitude of sins. The handy, media-friendly label that points an accusing finger at a coven of crimped youths who all cringe together: “But we’re not.”

This brings us to popular goth misconception No 1: that the media invented the word goth – an untruth. Checking back through the Sounds mausoleum, we find that reviewers searched for months for that elusive phrase to sum up these post-punk, post-Numan, pan-sticked beauties. Were the Cramps graveyard chic? Was Pete Murphy an aesthetically pleasing zombie? Was Marc Almond a little pervert? Nobody knew quite how to say it.

Then along came Abbo, singer of grungy noise-masters UK Decay. “We’re punk gothique,” he burbled in May 1981, oblivious to the great meaning his innocent words would soon take on. Therefore Abbo (who is now, incidentally, the manager of the Claytown “Not Cult” Troupe) was the perpetrator of the term. The media just exploited, revelled in, and ultimately hackneyed it to death. 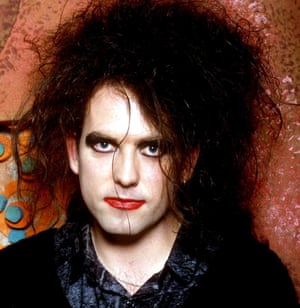 Robert Smith of the Cure. Photograph: Brian Rasic/Rex Features
The period from 1980 to 82 was a great, blossoming period for our noble gothfathers. This was the age of innovation, and from it came the greatest of all goths.

Of course, Nick Cave, Robert Smith, Andrew Eldritch and Marc Almond have since moved on and more than proved themselves as tragicomic geniuses, not content to stay forever festering under goth’s protective veil.

But back then the icons were cast. With her continuous death fixation, raven, gravity-defying spiky hair, Egyptian makeup and pervy fishnet tights, Siouxsie Sioux was the perfect role model for aspiring gothettes.

She has never been surpassed. The Ice Queen was as sensuous as a switchblade, and the Banshees’ 1981 classic album, JuJu, defined all the rules of The Book of Goth: vampire sex, murdering your mate and collecting shrunken heads under your bed.

Meanwhile, Bauhaus took Bowie’s vision of androgyny to its most sinister limits. Guitarist Daniel Ash, tall, skinny and paint-splattered, had probably the most influential hairstyle of the first half of the decade. He would only be bettered byRobert Smith who, in 1985, had the cunning foresight to allow a large tarantula to nest on his head.

Depravity and the ultimate nihilism came in the explosive form of the Birthday Party, whose 81 debut Prayers on Fire and awesome live shows all but burned the ears off their listeners.

Nick Cave immediately became a living legend – a drug-crazed, satanic messiah; the bastard offspring of Iggy Popand Herman Munster. “It amuses my mother,” shrugged the man dryly in 1982. He remains the coolest of all.

The Cure and the Bunnymen kept the pasty face of long-mac miserablism uncracked with Faith and Pornography, Crocodiles and Heaven Up Here, respectively. Each added grandeur to Joy Division’s stark design, with the latter sliding in some Doors-inspired psychedelia – a pointer to a future goth mutation.

Stateside, the Cramps and the Gun Club mixed voodoo rockabilly with a camp, theatrical horror show derived from great spirits like Screamin’ Jay Hawkins. Fine days indeed, and a time when goth implied a romantic escapism, with individuality the key. Of course, it couldn’t last. 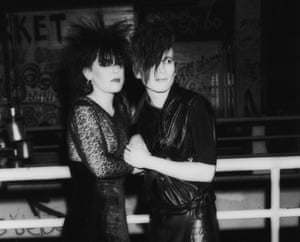 The next three years were a breeding ground for lesser goths, most of whom were mere fashion followers. London’s infamous Batcave club, run by Specimen singer Ollie (who bore a stunning resemblance to Tim Curry in The Rocky Horror Picture Show) even guided Smash Hits through its portals of doom. The Batcave travelled to locations around London, and was started because Specimen could only get gigs by providing the venue. But it thrived for a few years and was made credible by the patronage of all our esteemed gothfathers. An embarrassed Ollie even admitted: “We do make a fair bit of money.”

Essentially, the Batcave was about frivolity and fun rather than doom and gloom, and rated “10 on the gothometer”, according to the ever-articulate Abbo. When the woodwork squeaks …

Out spring the arty clotheshorses. Flesh for Lulu, Alien Sex Fiend, Skeletal Family, and a host of even more unmemorables did battle with a fresher new breed of drum-machine aficionados – Danse Society, the March Violets and – original and best – the Sisters of Mercy.

Cries of “bloody hippie” often greeted the young Eldritch as he led out his Mercy machine. But, despite his giveaway sideburns and crushed velvet frock-coats, these taunts were water off a deathwatch beetle’s back. With a twinkle behind those permanent sunglasses, Spiggy would mercilessly flay his audience with historic versions of Hot Chocolate’s Emma, the Stones’ Gimme Shelter, the Velvets’ Sister Ray and Abba’s Gimme! Gimme! Gimme! (A Man After Midnight).

Unfortunately, this eloquence was not enough to dispel popular goth misconception No 2, which decrees that all those who dress in black are pompous, humourless bastards. We can only fast forward to the current good work being done by the Cult and the Nephilim to begin to dispel this myth. 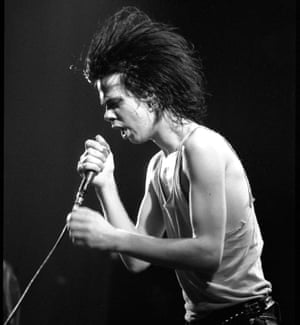 Back in the mid-80s, strange days were dawning. The start of 84 was particularly bad, with the Birthday Party, Bauhaus and Soft Cell all internally combusting. A heady debate raged in Sounds as to what made a true goth – was it an alien sex-fiend fan or a Bunnymen fan? Such was goth’s widespread appeal.

This madness had to stop somewhere, but instead it chose to go completely over the top.

Tired of wearing nothing but black, and of finding out any more new ideas for themselves, the goths took a mighty swerve into gross Technicolor. The instigators of this cunning move were Christian Paris and his charge, the Doctor, men hooked on psychedelia, wearing flares big enough to engulf the minds of a nation.

His Alice in Wonderland club in London’s Soho became the Batcave’s unnatural heir. Here Doctor and the Medics set about turning the disciples of darkness into foaming, multicoloured paisley love kids.

But not only did the whiff of incense transport the goths – it also got into the minds of their glorious leaders. Ian Astbury, who had for some months been battling with Eldritch for the best live cover of Louie Louie, was transported from a punkish “Red Indian” into a love bead guru, as surely as Love is his testimony.

The Doctor also lent a songwriting hand to the Damned’s Grimly Fiendish, the chart hit which tuned in the teenies. Dave Vanian, resplendent in Edwardian ruffle chic, cut another stirring image ripe for pilfering.

But 1985 was marked by a sad incident – another tombstone to be erected down the passageway of goth. For it was in June that year that the Sisters split. Founding guitarist Gary Marx had already left by the time of their final gig at the Royal Albert Hall on 17 June. For the last time the head of Eldritch, framed by its distinctive cowboy hat, loomed out of the dry ice and was gone.

The following few years were less than inspirational. The Medics blew their credibility to pieces by reaching No 1 with a cover of Spirit in the Sky, in the summer of 86. Eldritch and Hussey fought it out for the Sisters’ name, and slunk off despondently to make the cold, lifeless Gift and the bad Bunnymen of God’s Own Medicine, as the Sisterhood and the Mission, respectively.

Only Nick Cave distinguished himself, with Kicking Against the Pricks and Your Funeral … My Trial, in which he began carving himself into the Bertolt Brecht to Marc Almond’s Jacques Brel of the late 80s. But who was doing it for the kids? 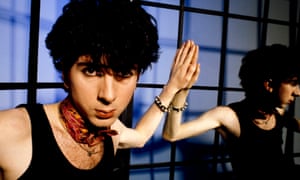 A terrible by-product came of Zod’s riff repetition, fake Yank accent and tongue-in-cheek sexism. He succeeded in making metal fashionable to the goths. As a result, ex-March Violet Simon Dee tried it on with the dismal Batfish Boys, greboes were everywhere and the Cult took a trip to Johnson Leathers and made Electric. 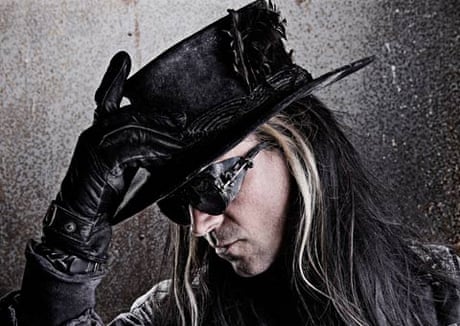 The more traditional line was becoming increasingly depressive, too. No longer the place of the forward thinker, goth plunged into the realm of the tribal. In this arena of backwards logic, the Fields of the Nephilim rose.

Snatching an audience of predominantly underage goths, the Neph exploited dry ice, cowboy hats and deep gurgling vocals for all they were worth. Coupled with the attractive, though dubious mysticism of singer Carl McCoy, the Neph had it all, and ghost-rode out of the mess with all the glory.

And yet, despite having made videos in which Carl is hanged by irradiated mutants (Preacher Man) or boiled alive in a cauldron surrounded by elfin witch doctors (Blue Water), the Neph claim to have always taken their work seriously – and never to have known of the Sisters’ existence.

In the late 80s, elitism and imagination have long since fled the passageway of goth. The Cult and the Mission both boast mass stadium gross-outs in their battle to become the Led Zeppelins of the 90s. The Neph, with their burgeoning army of followers, are not that far behind.

Goth has become mainstream enough for the chain stores to exploit, and has (un)inspired as much of a sheep-like response from its followers as any standard fashion victims.

But all is not quite lost. The next goth mutation is already upon us, although all those involved can rightfully scream in anguish at being so unfairly labelled. It’s just that all their followers wear black …

Loop, Spacemen 3, Thee Hypnotics, the Telescopes and a host of others have all unlocked the gates to the passageway of doom. In a not dissimilar fashion to the end of the 60s, the 80s are riding out on a tidal wave of mutant feedback, hyper-driven wah-wah pedals and disenchanted nihilism.

In particular, Loop’s Reading festival appearance this year made a sparkling promise of greater things to hope for.

Goth’s rich escapism has been a necessary part of the austere 10-year Conservative reign. And despite its troughs – which, incidentally, have coincided with periods of dilution of mainstream pop and rock music – there is still a veritable army of people left who don’t want to become part of the Me generation.

The colours of darkness are still bewitching and beguiling.